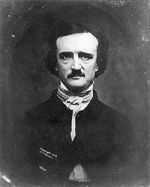 I read in The New Yorker an excellent riposte to a prevailing interpretation of Edgar A. Poe’s life as a troubled Romantic genius, on the boundaries of society, forging a new aesthetic. It brought to the boil a belief that’s been simmering away for some time: that writing fiction is less about listening to the whisper of the muse and more about being buffeted on the winds of the banal practicalities of life – which in Poe’s case, included market economics. It’s a reminder that it’s perspiration, not inspiration, that fires human endeavour.

Poe, like many other (and especially Romantic) writers, helped create and sustain the myth that he was somehow ‘otherwordly’, dominated by a mysterious muse that separated him from the rest of us. His early poem,  ‘Alone’, distills the flavour of his own brand of artistic isolation, what we might now call a PR exercise in developing his ‘brand’:

In surely what is as subtly felt as the most endearing self-love, we all like to think we’ve taken Frost’s ‘road less travelled’. Yet very few of us live outside our times and its constraints, and Poe didn’t either. As the piece shows, that despite moments of relative prosperity, he was often extremely poor, living hand-to-mouth and for years desperate to make ends meet. This, more than any other factor it seems, influenced the choices he made when writing. Contrary to what we believe – or like to believe – the material concerns of his daily life influenced, or usurped, his aesthetic.

Take for example his infamous ‘Poetic Principle’, which states that a work of fiction – including epic poetry, for example – should be delivered in short enough pieces to be read at a single sitting. Poe claims this has an aesthetic foundation: a longer work cannot sustain a mood or feeling, or even an organised metre in the case of poetry, in the same way a shorter work can. However, it seems other, more prosaic and pressing reasons caused Poe to write the kinds of short works he became famous for. His novel The Narrative of Arthur Gordon Pym of Nantucket was a failure and since he became entirely poor during the long period of its writing, he needed to make money regularly. Hence, he turned to short stories. Similarly, his longer poems ‘Al Alraaf’ and ‘Tamerlane’, were unsuccessful. His ‘Poetic Principle’, delivered shortly after their publication, helped justify what must have been a heartbreaking disappointment: if he couldn’t do it, no one could.

When I hear of such a seemingly banal explanation of what seemed previous a mysterious, wonderfully awe-inspiring life, I feel no less impressed by the quality of his work. Should I lament what I think might be a loss of innocence on my behalf? Thinking like this reminds me of that adage that tells us that when we are young we are idealists and only when we experience the indifference of the world do we turn to a more practicable realism. Expressed in coarse party-political terms, we start out socialists and end – when we’ve got a mortgage, a job and the trappings of material wealth – as Conservatives. When younger, I cherished the thought of Coleridge and Wordsworth wandering through woodland above the Lakes, discussing Shakespeare and minting a new way capturing thought and feeling on behalf of the rest of humanity, who were unloved and ignored by the muse. I even started to smoke a pipe, first near Lake Windermere, as an affectation, in sympathy with those poets I loved and thought represented the proper stuff of a poet’s life.

Does it lessen the impact and love of these works and their writers to find that they were written without such a lofty providence? I don’t think so. This is not to say that I no longer love the work of Poe, or Coleridge and Wordsworth come to that. It’s simply that the myth of their production in unnecessary for their interpretation, and my appreciation. My innocence and yours is an overrated virtue and if you’ve ever set down to write seriously, or read a book written with care and attention, then you’ll appreciate the simple hard work, imagination, discipline and organisation that underpins such a fictional work. Such very humble and human elements appear to me far more valuable than the unearned, inspiration (itself a misnomer, its origins in the ancient Greek for the ‘breath of the divinity’) for which the outmoded concept of a natural Romantic genius is the lingering and pernicious myth.